The risks associated with terrorist attacks in Europe are continuously rising, therefore the necessity of a portable, fully automated detection system is very present and urgent. The system will have selective and sensitive sensors, capable of detecting traces or particles of the main explosives on various objects (parcels, vehicles, clothes) or on the skin.

Centre of Scientific Research for Defence, CBRN and Ecology of the National Defence Ministry (CCSACBRNE)

IMT designs and manufactures the TF BAR sensors. UPB and UPIT cover the design and development of the electronic circuits and testing interfaces. ICF develops the sensitive layers used for detection and CCSACBRNE provides the know-how in the field of explosives and the required expertise for testing the sensors in real environments (military range).

The specifications of the TF BAR microsystem were defined during 2018, along with the technological and device design and the development of the mask set for fabrication. Also, the bioactive surfaces functionalisation methods were developed and tested and the block diagrams for the sensor’s readout electronics were defined. The technological design and the layout development led to the masks set fabrication.

The best anti-TNT antibodies bio-immobilisation efficiency was obtained through the G protein. Further tests will be conducted for obtaining the detection limit and the sensitivity of the bio-functionalisation method for TNT concentrations lower than 50 ppm. Other explosive substances (such as RDX) will be considered, as well. Layout of the TFBAR sensor for explosive substances detection

Block diagram of the electronic module for the sensors characterisation

In 2019, the piezoelectric layers have been developed in order to integrate them into the high frequency (GHz) resonator sensor.

A new sensor layout was proposed and, in parallel, tests were performed on a TFBAR sensor with Al top electrode.

COMSOL Multiphysics® simulations were deployed, regarding the operating principle of the newly proposed TFBAR sensor. The analyses also considered an added mass on the upper surface of the resonant structure, corresponding to the mass of gas adsorbed in the deposited sensitive layer. At a 10 ng mass load, a resonance frequency decrease of approximately 150 MHz was recorded, as compared to the resonant structure without the mass adsorbed on the sensor surface.

A new method of functionalizing the TFBAR sensor with Al electrode has been proposed. The proposed method is a specific one and at the same time represents an alternative to the functionalization with chemical linker and biomolecular linker.

The block diagram for the design and manufacture of the electronic sensor reading block has been developed. This is based on the measurement of the resonance frequency deviation of the TFBAR sensor by the differential method. The simulations made for the differential measuring block by mixing the signals of two Pierce oscillators have shown that this solution is viable, because different variations of frequencies can be measured and thus tiny mass changes can be detected at extremely low vapour concentrations in the range ppt-ppb. Thus, explosive substances can be detected in very low concentrations. 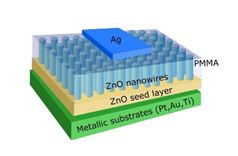 The architecture of the nanostructures contained by the complex piezoelectric sample 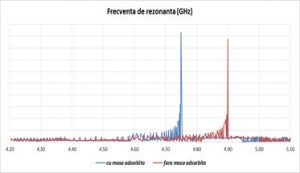 Comparative resonance frequency: with added gas table and without In the current stage of project 1, the nanofire PMMA / ZnO sensitive piezoelectric layer was developed and was chosen for integration in the TFBAR type sensor.

The layout of the initially proposed TFBAR sensor was modified, obtaining a different layout and, in parallel, the surface (aluminum) electrode, was functionalised, obtaining the same  TFBAR-type structure, but with a ZnO piezoelectric layer.

From the point of view of the electronic components, the block diagram was made, which is based on measuring the deviation of the resonant frequency of the TF BAR sensor by the differential method (by mixing the signals of two Pierce oscillators – the homodyne variant).

The testing of the sensor area in the case of a mass adsorbed in the detection layer of the TFBAR sensor was simulated, following the simulations performed, the decrease of the resonance frequency was observed.