The main objective of this project is to develop non-dispersive optical sensors, having high sensitivity, to operate within the infrared spectral range. These sensors can be used for hazardous gas detection in industrial buildings to increase the security level of this type of infrastructures.

The main advantage of the proposed sensors is their high selectivity with respect to the types of gases detected (calibration on absorption spectral range specific to gas of interest – e.g. methane, carbon monoxide / carbon dioxide), which will reduce the risk of false negative or false positives signals.

The innovative side of the proposed project is based on achieving a high selectivity for the sensor by overlaying very precisely the spectral characteristic of the infrared source and the detector response that has the gas absorption bands in the Mid-IR range (3 μm – 8 μm). The novelty of this project consists in the application of a new concept in photonics, namely the metasurface, for controlling and adjusting the spectral characteristic (reflection, transmission, absorption, emission) of a micro / nanostructured surface. 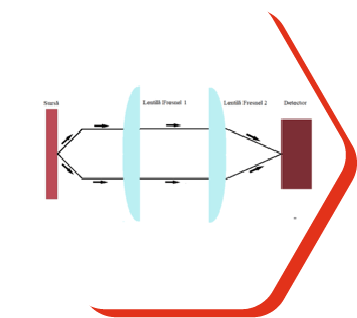 IMT is responsible for design of plasmonic metasurfaces, developing gas sensors and of related manufacturing technologies. INFLPR carries out the optical and mechanical tests and characterizations, including calibration of the sensor.

During the Phase I the following activities were carried out:

An example of metasurface with gold cylindrical resonators on Al2O3 substrate:

a) the sketch of the structure

b) the structure layout used in simulations

Detection of proposed system: at the level of the thermal emission source, an electric current is applied which determines the heating of the resistance by Joule effect. The specifically tailored  metasurface, placed directly over the classical thermal source, will absorb all the radiation spectrum emitted and will filter and transmit to the detector wavelengths specific to the absorption lengths of the different gases that are found in industrial infrastructures; Fresnel lenses are used to collimate the radiation, and a commercial detector will be used for the radiation detection emitted by the selective source.

Three components of the proposed system were technologically fabricated and characterized during 2019: the large-spectrum radiation source, the metasurface specifically configured and the Fresnel lenses. In order to optimize the geometries and technological processes used, the following objectives were achieved:

Figure 2 Components of the thermal radiation source: a) Platinum resistance consists of 2 meanders (layout) and images of the obtained technologically resistor consists of 3 meanders; b) Proposed metasurfaces used as perfect absorber (layout and SEM image)

In Project 3, taking into account the results obtained in the previous stages, the optical components of the detection system were optimized and the corresponding experimental models were made.

Moreover, an experimental model for the hazardous gas detection system was developed. The optimized optical components were characterized by the experimental procedures developed in the previous stages, for each component being prepared a test report.